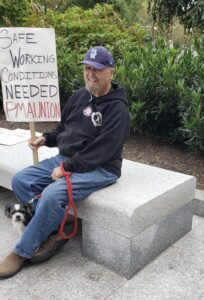 Sammie and I joined the Museum workers picket line on Friday with Fran, a former comrade from Put People First.  The Philadelphia Museum of Art workers went on strike last week because they had become frustrated with the lack of progress in negotiating a contract for their new union.

At home, Sammie generally sits under the table where I’m reading.  We’re studying Jean Piaget’s The Construction of Reality in the Child, the second in his three volume series examining how the human child develops a self as an independent object in a universe of self-subsistent objects.  I’ve described before how reading Peter Godfrey-Smith’s books about octopuses (Other Minds) and other animals (Metazoa) challenged my interest in the Buddhist teaching of not-self.  If, as he claimed, even simple organisms are aware of themselves as a self (in a broad, never really defined sense), I wondered whether ontogeny recapitulated phylogeny in the emergence of human consciousness and sense of self.  Hence, I started studying Piaget.

When Alison Gopnik co-wrote The Scientist in the Crib in 1989, Piaget had become somewhat out of favor among child psychologists, who preferred Naom Chomsky’s theory of innate language structures over Piaget’s more developmental views.  The pendulum has swung back more towards Piaget, not without some criticisms. Ten years later, Lakoff and Johnson reported that Chomsky’s philosophical assumptions “are almost entirely inconsistent with empirical research on mind and language coming out of second-generation cognitive science.”  In any case, despite his abstruse terminology I am fascinated by Piaget’s research into children’s growing universe of objects, space, and time in which one places one’s self.

Piaget sees a paradox in this process. Newborn infants are solipsistic with no sense of a self separate from  the reflex actions of sucking, touching, and seeing. They are unaware of themselves even though they’re self-absorbed (solus + ipse, alone + self).  As the infant interacts with things “the hand that grasps, the mouth that sucks, or the eyes that look are no longer limited to an activity unaware of itself.”  Hence, the egocentric emerges in a world of which one is not only the center, but the prime mover. The nursling perceives any events as simply extensions of what one is doing.  With more and more interactions the child learns to see things as lasting separately from one’s actions.  “In short, to the extent that objects become detached from the action, the body itself becomes an item among other items and is thus brought into an aggregate system.”

In sum, Piaget sees humans as developing from the solipsistic newborn, self-absorbed without a sense of a separate self, to the egocentric toddler, to the child who constructs an “ordered environment” made up of distinct objects, among which is included one’s self. Paradoxically, “it is precisely when the subject is most self-centered that he knows himself the least, and it is to the extent that he discovers himself that he places himself in the universe and constructs it by virtue of that fact.”

I know it’s dangerous to equate modern science with ancient Buddhist writings, as Flanagan among others has warned, but it seems to me that Piaget touches on the same dynamic processes that the Buddha summed up in the factors that characterize our existence, which is anicca (constantly changing) and anatta (constructed, conditioned ).  In the next post, we’ll explore how Piaget avoids the trap of idealism, the idea that if the world and the things in it are constructed through our experience, then they are not “real,” but products of the mind.