Home Driving under the influence of Dunkin' Donuts Life in Braintree 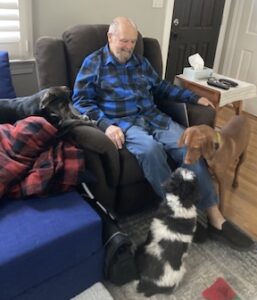 Up at Anne Mei and Katie’s in Braintree for Christmas and my birthday.  In addition to their dog Archie (on the sofa next to me) and my Sammie, we now have Tara, the vizsla facing off with Sammie.  She is staying with us for the weekend while her folks go skiing in Colorado.

Anne Mei and Katie work arduous schedules.  Katie worked 8pm-8am shifts the last two nights.  I dropped Anne Mei off to her hospital job Monday evening and she didn’t come home until this morning (Wednesday).  After Tara arrived, Anne Mei had to go back to work until tomorrow afternoon.  Then we’ll have the weekend to celebrate.

Picking up Anne Mei at the Braintree train station at 7:20 this morning turned out to be a test of equanimity,  I’m used to driving a car that’s parked in a heated garage so I did not think to heat up the car before getting in.  The windshield was all frosted over. I could not figure out the controls in Anne Mei’s car and couldn’t find the defroster button.  Finally I called her for help.  Then, right after GPS told me to turn right on Union Street, my phone battery went dead.  Although I was sure that I was driving in the right direction, I just didn’t see any signs of a train station for a while.  So I pulled into a gas station and asked some guys for directions, which I got despite Sammie’s barking at them.  When I got to the station, the windshield was still partly frosted over so I missed a sign and ended up going the wrong way on a one-way street.  I asked a workman if that was the case and he said it sure was.  He helped with stopping pedestrian and vehicle traffic while I turned around.

During these glitches, my imagination kept picturing Anne Mei waiting for me out in the cold.  What I noticed is that the practice helped me keep my cool and to take the appropriate action, ask for help.  Still work to do on letting my mind fill up with worst-case scenarios.  In any case, Anne Mei arrived just as I finally got to the platform.

Katie did not come home right after work this morning because she had to take her Mom to the ER.  Turns out she has COVID.  More precautions to take now, such as my brother Patrick and his wife Joyce won’t be coming for lunch tomorrow.  All this in one morning in Braintree.

I took AMTRAK up here on Sunday.  The start of the journey was hard for Sammie.  The sedative I gave him for the train ride in a small carrier took a while to kick in.  So it was a struggle to get him into the carrier, and he kept scratching to get out in the station and for the first hour on the train.  After that, with the motion of the train helping, he slept for the last five hours of the trip.  Sammie and Archie are getting along much better than they did at Thanksgiving.  It remains to be seen how things will go with Tara.  Feeding is a logistical issue because Sammie likes to graze and the other two are thieves.