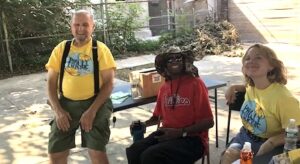 Spent the afternoon (June 25, 2022) at the corner of Tasker and Myrtlewood in Grays Ferry working at the Philly Thrive Circle Fair.  The guy between Marley and me is named Joe.  He has a son named Ken.  I told him that this Ken has a son named Joe.  He was helping one of the Thrive staffers to ferry folding chairs, tables, and other stuff down to the site of the Fair.

Philly Thrive chose this site to have a party for the neighborhood and explain what our work circles do.  I belong to the Mutual Aid Circle.  One of our tasks is to distribute food bags every Friday around the neighborhoods of Grays Ferry and Point Breeze.

Marley and her sister Lily coordinate the Mutual Aid Circle.  They’re identical twins, and the only way I can tell them apart is that Lily’s hair is longer.  When we arrived this afternoon, I congratulated Marley on the fact that we were under shade trees.  Between my fair Irish skin and her fair Middle European skin, the bright sun this afternoon would be most uncomfortable.  Unfortunately for Marley, she was quickly drafted to work on making and serving cotton candy.  She had to work in the sun for the rest of the afternoon.

I stayed at our table distributing information about what the Mutual Aid Circle does, passing out cleaning supplies left over from our Spring giveaway, and recruiting people to help with driving food bags on Friday afternoon.  After about 2 ½ hours I had obtained about 10 signups for more info on how to help.

When Marley came over after all this time, her face, neck, and arms were bright red.  She said she had cotton candy in her hair.  All in the cause.

We picked this site because the City is selling it to a housing developer who will cut down this stand of trees.  Trees are few and far between in many streets in Grays Ferry.  They say that the development will include affordable housing, but their so-called below market rate prices are beyond the income of most residents in the neighborhood.  We’re fighting City Hall on this, and have support from at least two Council members.  The same two who were at the demonstration at City Hall last night to protest the Supremes attack on women’s rights to control their bodies.