Home Driving under the influence of Dunkin' Donuts Reverse engineering (1) 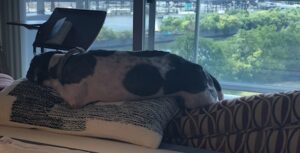 Sammie’s adoption papers didn’t tell the whole story so I wrote to the Baltimore Animal Rescue and Care Shelter (BARCS) to find out how Sammie came to them.  This is what they told me:

Rock [Sammie’s name at the time] was surrendered to Animal Control in December of 2020, which is how he ended up with us. His owner stated she moved and her new lease did not allow dogs, so she couldn’t keep him any longer. Unfortunately, that is all of the information we were given. He was only in our care for two days before Saved Me pulled him from us.

Since one person had told me that Sammie had been found abandoned on the streets of Philadelphia, I went back to Saved Me for the continuation of Sammie’s story.  Here’s what they said:

Yes, he did arrive from Baltimore that quickly. His intake here was before both [our] time so I don’t know how she found him but I know that she went down to BARCS and pulled 2 unrelated dogs the same day – him and a pittie. He was then adopted very soon after, just a few days later in December 2020. I don’t think the staff at the time really got to know what he was like that soon. He eventually came back to us 8/25/2021 and has been at our shelter ever since.

I find both stories of Sammie’s surrender curious.  About Baltimore, I ask: if you’ve had a dog for ten years, why move to a place that won’t allow pets?  Unless, of course, the dog has become old and hard to handle.  Same with the Philadelphia story.  After nine months living with the dog, you would think you would know better than to try to cut his bangs with a scissors.  Other notes mention a boyfriend getting bitten.

In any case, Sammie was in the shelter for almost a year before coming to live with me.  He’s settled on one corner of the couch as his.  Sometimes he’s on the arm, sometimes (as above) he’s on the top of the back of the couch, mostly he cuddles into some blankets on the seat.  When he’s not snoozing, he watches out the window.

I titled this post Reverse Engineering (1) because it backtracks how Sammie became the doggie-self that he is.  Reverse Engineering (2), which I originally set out to write, will talk about what I’ve been reading lately about how that sense of self arises.  Back in June, Carlo Rovelli’s latest book alerted me to the writings of the scuba-diving philosopher Peter Godfrey-Smith.  Since then, I’ve read his book Other Minds, which mostly focuses on his studies of octopus minds.  From there I went to his follow-up book Metazoa: Animal Minds and the Birth of Consciousness, which takes a broader look at how consciousness, mind, and self arise during the course of evolution.  For someone who is especially interested in the Buddhist teaching of not-self, I am challenged by PGS”s assertions of finding self emerging not only in mammals, but cephalopods like the octopus, and even in bees. Now I’m plowing through the child psychologist Jean Piaget’s classic study of The Origins of Intelligence in Children, the first of three volumes on the development of mind, consciousness, and self in humans.  I wonder if ontogeny recapitulates phylogeny in the mind as well as the body.

Not to worry that I’ve totally nerded out.  I’m now immersed in Slough House, book 7 of Mick Herron’s wonderful spy series about the Slow Horses of MI-5.