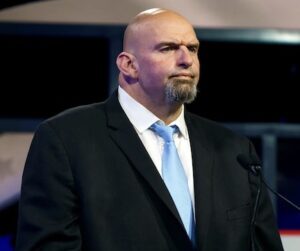 The whole country is reacting to the debate in Pennsylvania this week between the two main Senate candidates , Democratic Lt. Governor John Fetterman and Trumpster talk show host Mehmet Oz. More attention is being paid to Fetterman’s hearing and speech disabilities caused by his stroke this summer, than to the substance of their political differences, or to their characters.

This kind of reaction is precisely what Laura feared most about the aphasia caused by her brain cancer.  As someone with two doctorates and working in a highly competitive legal office, Laura was afraid that her aphasia would be taken as stupidity.  In fact, until the final month when she was on heavy painkillers, Laura’s mind remained sharp.  She couldn’t always find the words to express her thoughts, but she had good insights into her experience, her work (when she was able to return to the office for a few months), and what was going on in the world in 2009.  As challenging as it was, she read the New York Times every day and the New Yorker every week.  Even when her eyesight was failing because the cancer was cutting off part of her vision, she would listen to audio files of Shakespeare plays.  No fluff for Laura.

Even if I hadn’t already submitted my absentee ballot for Fetterman, I’d still feel badly for the unfair things that are being said or implied about his intelligence.  Unfortunately, I’m afraid that appearances will outweigh Oz’s record as a TV huckster and charlatan.

Speaking of appearances, even if Fetterman’s speech had not been hampered by the effects of his stroke, he would have what people my age will remember as Nixon’s problem when he debated Jack Kennedy in 1960.  Nixon’s heavy beard accented how pale and tired he looked.  He had been favored to win before the debate, but not after people reacted to the contrast between him and the younger Jack Kennedy.  Aside from his speech, Fetterman came across as a scowling, overweight man in an ill-fitting suit.  No wonder he prefers hoodies and shorts.  He probably should have worn them.  He probably would have been and appeared more comfortable, even if it gave the pundits conniptions.