Home I will miss you Get together, now 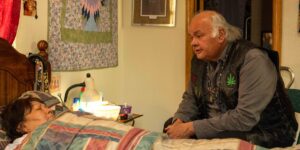 Lately I’ve not had much patience for sitcoms, even good ones like Abbott Elementary.  I’ve stayed with Reservation Dogs (on Hulu) because I’ve been fascinated with its clear-eyed view of contemporary Native American culture.  At times it’s been boring, at times silly. at times confusing as to where it’s going.  But the episode I just saw, Episode 4 of Season 2, is one of the most beautiful, loving depictions of how we all should die … surrounded by family, friends, and neighbors.  The episode is titled “Mabel,” the name of the dying grandmother of Elora, one of the central characters in the series.

At the beginning of season 2, Elora and a friend were heading from Oklahoma to California, until they weren’t.  When Elora’s friend caught up with her back home and asked her why she’d just dropped off their quest, Elora said the grandmother who’d raised her was dying.

In this episode Elora’s friends, the “reservation dogs,” are with her in her house, along with her aunts, community elders, and most of the characters we’ve seen in the series.  Elora is in the kitchen with the older women preparing fry bread and other dishes for a meal they will all share.  She has brief, but intense conversations with her friends and with her aunts about what is going on.  Frequently, breaking away to stand at the door of the bedroom where her grandmother lies with family and friends taking turns holding her hand, wetting her lips, and tenderly talking with her, even though she just lies there quietly.

After the meal, the aunt who had moved away from the town after her sister, Elora’s mother, died, goes outside to smoke a cigarette. There she meets the local lawman, who is out looking at the stars. He says it’s crazy how a dying loved one brings people together. They should get together before death. Laura’s aunt says death brings people together so they can have closure. They didn’t get together after her sister died. That death nearly ended everything for the family. The lawman says he isn’t really sure why he’s there. He says he’s not doing anything. Tini, the aunt, says he’s there for Elora. (This summary does not do justice to the depth of feeling and understanding in this scene.)

In the middle of the night, as everyone lies or sits sleeping wherever they’ve fallen, one of the elders comes to get Elora.  “It’s time.”  Elora is there as Mabel passes with one of her daughters sitting close by and the elders chanting Creek prayers.

Elora runs out of the house, saying that she needs air.  Behind the house she encounters an instance of the magical realism that plays throughout the series.  Nothing “Hollywood” about the encounter just the same tenderly tough kindness that runs through this episode.