Home Driving under the influence of Dunkin' Donuts Interbeing. Being inter. 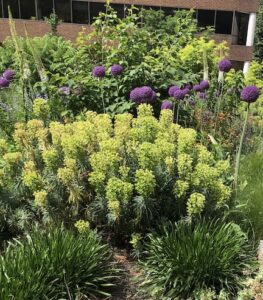 I heard a bird singing today.  And…? you might want to ask.  This bird was singing so beautifully and strongly that she cut through the otherwise overwhelming noise of trucks and cars rushing by on Market Street.  It seemed the louder the traffic got, the stronger rose her song through the din.  I smiled to hear her.

Aside from the thundering traffic, my mood was full of fear and foreboding.  I had taken the 49 bus from the Parkway to the corner of Market and 34th.  From there I walk up Market to the Penn Medicine University City building at the corner of 38th.  There, I had a dental appointment for work on a cavity on one of my upper front teeth.  The novocaine shots in that spot, usually feeling like a needle right up the nose, can be painful.  As if that weren’t bad enough, one of the front teeth on the bottom felt as though it might fall out.  It had been shifting for a few years, but this last weekend it moved farther out of line and really hurt, even when I just had my mouth shut.  I had called the dentist yesterday to alert him that he might have to work on that tooth, as well.  Worse than a needle up the nose, I had visions of losing a front tooth in a spot where I knew there is not enough bone in the jaw to support an implant.  Maybe I’d look ok very gap toothed.

So, the bird’s singing lightened my mood.  She turned out to be telling me that I had nothing to fear, nothing to worry about.  The dentist gave me the novocaine with just a little bit of discomfort.  The dental technician was so pleased with how the filling now brightened my smile that she asked, “Are you going on a date tonight?”  X-rays of the lower teeth showed that there was no abscess.  The dentist said the shifting was mostly due to a misaligned bite.  So he ground down the displaced tooth a bit to take the pressure off.  That’s all it took to solve the problem.

As if the news from my visit with the dentist were not happy enough, as I was checking out the cashier discovered that they had been mistaken about how to bill with my new insurance that started in February.  Instead of making me pay today, they have to recalculate all my visits since February and will probably end up owing me money.  Thank you, bird!

Today was like the pocket garden on 20th that the 49 bus passes on the return trip.  Bordering a parking lot and surrounded by macadam streets on the other three sides, these lovely flowers sing like the birds to cut through what might otherwise be ugly about living in a big city.  (It’s not coincidental that this small garden is across the street from the Pennsylvania Horticultural Society.)

With the terrible news from Uvalde, Texas yesterday and all the other evil going on in this world, it is helpful to recognize the singing birds and pretty flowers when we meet them.  It’s not that we should use them to forget about the hurtful.  They just remind us to keep our eyes and ears open to the good as well as to the bad and the ugly.

P.S.  The title for this post refers to Thich Nhat Hanh’s teaching about interbeing.  We’re all in this together. “To be means to interbe.”