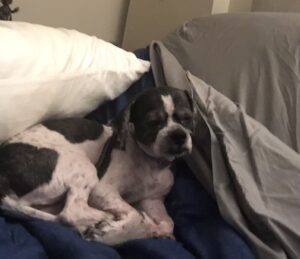 One of my favorite characters in Hill Street Blues is Sgt. Stan Jablonski, played by the actor Robert Prosky.    After Michael Conrad who played Sgt. Esterhaus died, Sgt. Jablonski took over the morning roll call from Sgt. Esterhaus, who famously ended every roll call with the line “Let’s be careful out there.”

Sgt. Jablonski’s punch line was “Let’s do it to them before they do it to us.”  By this he explained one morning he did not mean to violate citizen rights or act violently, he meant that good cops should do their jobs first before the bad guys do theirs.  Sgt. Jablonski was a kind man.

More than any on-the-job tag lines, I remember Sgt. Jablonski at home, getting ready for bed after he retired, and then going to sleep with his little dog in bed with him.  There was something comforting about that scene.

Toto used to sleep with Laura when she was sick, and then with me in the years afterwards.  Last night Sammie slept in bed with me for the first time.

He had slept in the crate most of the day, but became active later in the evening, including a couple of times trying to get up again on my bed.  I had to help him.  He eventually settled down on the couch, and I dozed off while reading in my easy chair, as I usually do.  I had been going into sleep mode with the light off for a while when I heard Sammie stir.  When I looked up, he was on the arm of the couch across from me getting ready to jump again.  I reached over and carried him across because it was dark.  He slept in my lap for a while.  I wasn’t going off into dreamland so I got off the chair to get into bed.

I carried Sammie over to the bed and put him in it.  It took him a while to dig into place, but once he was settled he slept soundly through the night.  As did I, with his body plugged into mine.  As usual I had to get up a few times, but Sammie did not stir.  Nor did he wake up when I got up to take a shower.

Only the sound of me preparing his breakfast got him off the bed.