Home Driving under the influence of Dunkin' Donuts Life with Sammie 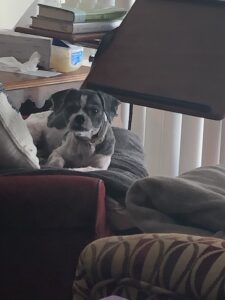 The last time Anne Mei and Katie visited with their dog Archie,I realized that I like living with a dog.  Since Toto died in 2019, I haven’t been sharing my life with an animal.  Since Anne Mei left for Boston in March 2020, when her MSW classes went online because of the pandemic, I have been living alone.

I went online to look for dogs in Philadelphia, focusing on older, smaller dogs who might be easier for me to handle on a leash.  Unfortunately most older dogs have health issues requiring meds and vet visits.  Not a problem for me, if that’s what it took.  But I was pleased to find Sammie, a 10+ year old Shih Tzu.  He had been staying in the Saved Me Rescue center for more than 11 months.  No chronic health problems identified on their website.

They said that Sammie had been found as a stray (unusual for a Shih Tzu). He was originally placed at ACCT, Philadelphia’s troubled and overworked animal control facility.  Saved Me is a no-kill rescue center and took Sammie from ACCT, which does euthanize.  It is in the Grays Ferry neighborhood where I deliver groceries every Friday, only a few doors down Federal Street from one of my stops.  They don’t have any big signs outside, so I’d gone by there dozens of times and never noticed them.

Sammie was adopted once, not sure whether from ACCT or Saved Me.  He was returned when his human tried to cut his bangs, and Sammie bit her.  The staff and volunteers at Saved Me like Sammie, but cautioned me to be slow and careful when trying to handle him.  He does not like to be groomed or brushed, which are necessary when Shih Tzu hair grows long.  When it comes time to cut his hair, the shelter takes him to a vet for “medical grooming,” which I assume means sedation.  The vet also has him on daily gabapentin to deal with the stress of living in a shelter.

Because of the uncertainty of how Sammie would adapt to living with me, we agreed on a foster-to-adopt arrangement.  I picked up Sammie three days ago in the afternoon, after the vet had finally fit him into his schedule for a grooming.  It was obvious that he had bonded with the woman who helped with the hand-over.  That was a good sign.

Sammie started exploring my apartment as soon as we arrived. In short order, he had jumped up on Anne Mei’s old bed and was rolling around on the comforter.  After that, he got up on my sofa and from there jumped across a two foot gap to get on my easy chair, where he stayed for more than an hour. (That’s the picture at the top of this post.)  I thought that was quite spry for an old guy.  He was also very hungry and thirsty, emptying both bowls greedily.

The following morning he discovered the crate that Saved Me had provided as part of the foster arrangement.  Since then, he has preferred to stay in the crate most of the time, sleeping there except when eating and going out.  Yesterday evening, however, I was surprised to find him sleeping on my bed, which is in the same room as his crate, but even higher off the ground than Anne Mei’s bed. (Picture below.)

Part of my surprise was that after the first day, he’s had trouble jumping up into my easy chair.  More than that as I’ve walked him more and more, he seems to have a problem with his hips.  He frequently stops and just sits on his hind quarters while we’re walking.  He also sometimes moves a bit awkwardly and hesitantly in grassy areas.  Because I know from experience how painful a bad hip can be, I’m wondering if pain may explain some of Sammie’s snappishness. Apparently Shih Tzu’s are known to have hip dysplasia.  When I adopt Sammie and get him checked out, I’ll ask the vet to look into this. 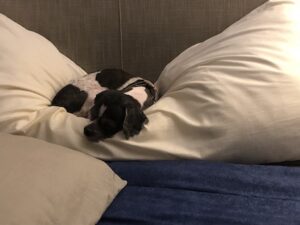